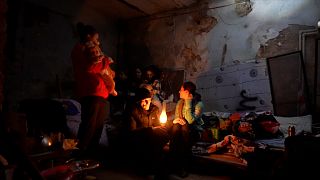 People in the besieged city of Mariupol were living in dire humanitarian conditions as reports of renewed Russian attacks emerged, threatening to derail efforts to evacuate trapped residents.

People in the besieged city of Mariupol were living in dire humanitarian conditions as reports of renewed Russian attacks emerged, threatening to derail efforts to evacuate trapped residents.

Civilians in the port city have been without water, heat, sanitary systems or phones for several days, one of the most desperate scenes of the nearly two-week-old war.

With water supplies cut, people have been collecting water from streams or melting snow. Soldiers on Tuesday were rationing bottled water and distributing it to women and children.

People sheltered in underground basements, anxiously waiting for news of evacuation efforts as they struggled to survive in a city where bodies have been left uncollected on the streets.

Power cuts mean that many residents have lost internet access and now rely on their car radios for information, picking up news from stations broadcast from areas controlled by Russian or Russian-backed separatist forces.