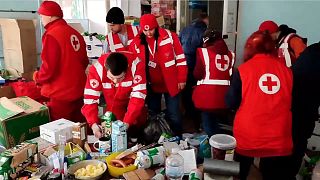 Red Cross responds to the most urgent needs in Mariupol

In Mariupol, south-east of Ukraine, the International Committee of the Red Cross (ICRC) distributed food and hygiene items to the more than 4,000 people living in shelters on March, 2.

The ICRC said that they had seen an increase in street-to-street fighting in Mariupol, saying: “The situation is incredibly tense, dangerous and distressing for people. We see that many people have no water, electricity, and minimal phone connectivity.”

According to the ICRC, its operation in Ukraine is among the 10 largest in the world and it is increasing as humanitarian needs in the country grow. The ICRC said: “The distribution of aid to civilians in Mariupol represents only a drop in the ocean of what is needed.”