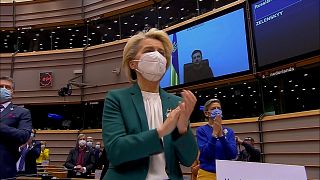 Speaking at a debate at the European Parliament EU officials also confirmed that they had received Ukraine's request to become officially a candidate country to join the Union.

However, they warned that if they were to welcome the initiative the process will still be long, and that first "we have to end this war, and should talk about the next steps."

Still, European Commission President Ursula von der Leyen said EU nation states should be in no doubt "that the people that stand up so bravely for our European values belongs in our European family."