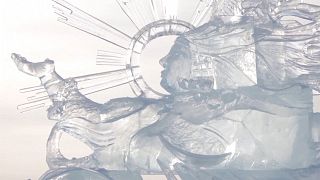 This ice festival is held annually on Lake Baikal, the largest in the world in volume.

This ice festival is held annually on Lake Baikal, the largest in the world in volume.

The event was organised with the support of French producer Philippe Duteuil, who visited Baikal five years ago and fell in love with it.

"Every time I talk about our festival in France, to my friends, many people around, they are all amazed by what they see. Because this is a different planet, this environment is totally pure, and this concept is very very attractive, because it's marvellous, and marvellous feeling is very rare today," says Duteuil.

He plans to organise an exhibition of photographs of the ice sculptures in France this summer.

Photographs will notably include that of the winning sculpture: "From Age to Age," made by the family of Sergei and Alena Korolkov.

They based their work on an ancient hunting calendar found on the territory of the Komi Republic and dates back to the end of the first millennium or the beginning of the second millennium.

One of the biggest difficulties for the sculptors was to get clean ice without cracks.