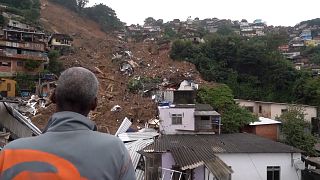 There was widespread concern that the death toll could surge as teams searched damaged areas in the Petropolis region, which saw hundreds of deaths from heavy rainfall in 2011.

Rio state's firefighter department said in a statement that more than 180 soldiers were working in the stricken region.

The department said the area got 25.8 centimeters (just over 10 inches) of rain within three hours during the day -- almost as much as during the previous 30 days combined.

Footage posted on social media showed cars and houses being dragged away by landslides and water swirling through the city of Petropolis and neighboring districts.

Petropolis' city hall said in a statement that the heavy rains left "a high number of incidents and victims" and that rescue and recovery efforts were continuing.