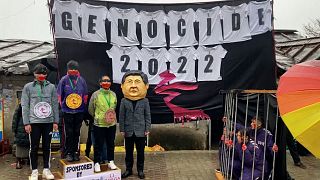 A group of Tibetan students in exile staged a protest on Thursday in Dharamsala, the home of the Dalai Lama in India, against the Beijing Winter Olympics.

A group of Tibetan students in exile staged a protest on Thursday in Dharamsala, the home of the Dalai Lama in India, against the Beijing Winter Olympics.

One of the protesters wore a mask depicting China's President Xi Jinping, while other protesters sat inside a mock jail with their face and hands smeared in red, representing what they described as the bloodshed and alleged human rights abuses committed in Tibet and other regions.

Human rights groups have dubbed it the "Genocide Games," as the U.S. and other countries have cited rights abuses in a diplomatic boycott of the Olympics.

China denies allegations of human rights abuses, calling them the "lie of the century".

The Dalai Lama has been living in India, along with his followers, since 1959 when he fled Tibet due to a failed uprising against Chinese rule.