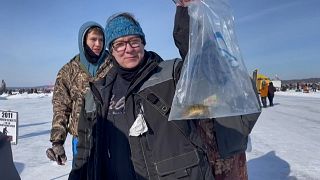 “The charitable aspect plus the $200-thousand-dollar prize (179 €) package is what keeps people coming,” said Sheena Ziegler, marketing coordinator for the Brainerd Jaycees.

It took two days to set up the Extravaganza contest site, four hours to fill the 518-hectare (5.18 km2) space with more than 10,000 people, and three hours to tear it down.

Proceeds from the Ice Fishing Extravaganza are donated to over 50 charities in the region.

First held in 1991, the Brainerd Jaycees have donated more than $4.2 million (€3.75 million) since the event's creation. It is entirely run and organised by volunteers.