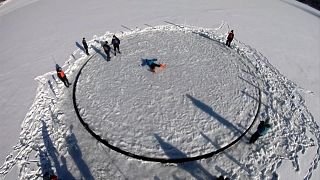 Authorities in a city in Hokkaido, northern Japan, have conducted a demonstration test of an ice carousel, hoping it will be a new attraction for winter tourism.

Authorities in a city in Hokkaido, northern Japan, have conducted a demonstration test of an ice carousel, hoping it will be a new attraction for winter tourism.

The ice carousel, also known as an "ice carousel", originated in Finland. It is made by cutting a circle out of a frozen lake and the ice plate rotates in a circular motion with people on it.

The test was carried out on Lake Kanayama in the town of Minamifurano on Wednesday. There were about 30 participants, including representatives of the tourism industry and high school students.

The circle, cut with a chainsaw, is about 13 metres in diameter and 40 centimetres thick. The workers rotate the plate of ice using their legs.

The people on the rotating disc enjoyed watching the slowly changing landscape of the lake and mountains, some of them lying on the ice.