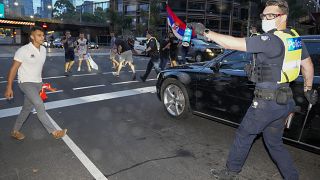 Supporters of Novak Djokovic crowded around a car that was seen leaving the tennis star's lawyer's office in Melbourne, believing it carried the tennis player, but the Associated Press cannot independently confirm whether he was in the car.

Police trying to disperse the crowd to let the car pass at some point appeared to douse people with pepper spray.

People were seen afterward washing their eyes with water.

Djokovic won a court battle to stay in Australia to contest the Australian Open despite being unvaccinated against COVID-19, but the government threatened to cancel his visa a second time.