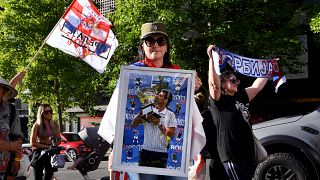 Novak Djokovic's supporters gather in a park opposite the immigration detention centre in Melbourne where the tennis world number is being held.

The vaccine-sceptic Serbian star readies his legal guns for a battle to stay in Melbourne and defend his Australian Open title, arguing he has the all-clear because of a positive coronavirus test in December.

Protesters gathered outside the Sydney residence of Australia's prime minister  to voice their opposition to vaccine mandates and the detention of tennis star Novak Djokovic. Almost 100 people gathered for the peaceful protest which was observed from a distance by state police officers.

Hundreds of people rally in Belgrade in support of tennis world number one Novak Djokovic who remains in detention in Melbourne.

'A great injustice has been committed and we can hardly wait for the truth to be revealed,' says Djokovic's brother, referring to an appeal to overturn the decision by lawyers arguing that the player is eligible for vaccine exemption.