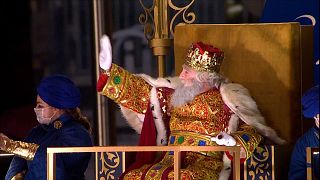 Madrid's traditional Three Kings parade was celebrated on Wednesday delighting children after it was cancelled last year due to the coronavirus pandemic.

Thousands of families packed the streets of the Spanish capital despite the rain, to watch the procession of impressive mechanical puppets, decorative floats and the biblical Magi.

Due to the high rates of the contagion in Spain, officials asked attendees to wear a mask and cancelled the traditional cast of sweets for children along the three kilometre (almost two miles) parade.

The Feast of the Epiphany, a Christian holiday, celebrates the Three Kings or Three Wise Men who followed a bright star to offer gifts of gold, frankincense (resin used in perfumes) and myrrh (tree gum) to the new-born baby Jesus in Bethlehem.

Christmas gifts are traditionally given on the day of the Feast of the Epiphany in Spain and also in many Latin American countries.