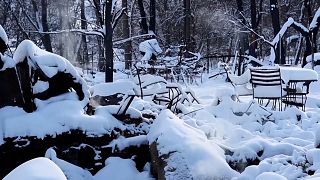 As families trudged through the snow to determine the condition of their homes on Saturday after a wildfire burnt through Denver's suburbs, one man was brought to tears but what he saw.

As families trudged through the snow to determine the condition of their homes on Saturday after a wildfire burnt through Denver's suburbs, one man was brought to tears but what he saw.

Homeowner Viliam Klein was overcome with emotion as he returned to his burned-down home in the US town of Superior.

Most of the homes were destroyed on Klein's street, including his 100-year-old house.

Colorado authorities were searching on Saturday for three people reported missing from the wind-whipped winter-season wildfire that destroyed nearly 1,000 homes and left thousands of people trying to salvage what belongings they could from the fast-moving blaze.

Those forced to flee the flames with little warning began returning to their neighbourhoods to find a patchwork of devastation.

On some blocks, homes reduced to smoking ruins stood next to ones practically unscathed by the fires.

Despite the shocking change in weather, the smell of smoke still permeated empty streets blocked off by National Guard troops in Humvees.

Officials had previously estimated that at least 500 homes - and possibly 1,000 - were destroyed and hundreds more damaged.