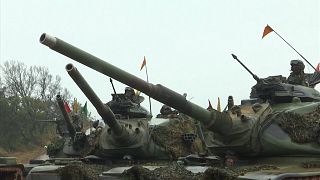 Taiwan's army conducted a live-fire exercise on Tuesday to test the combat readiness of its troops and the firepower of its armored division.

Several tanks fired rounds of live ammunition in a simulated response to an enemy invasion from the sea at the military firing ranges at Kengzikou Training Center in Hsinchu.

According to Ministry of National Defense, the army has planned to build two tank training facilities in Hsinchu County next year as it is scheduled to receive the new tanks from 2024 to 2026.

The Kengzikou Training Center will feature a wider shooting range facility to enable tank firing at night and while moving.