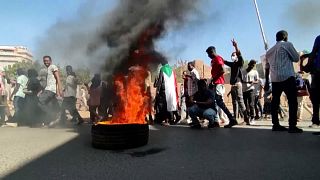 Footage by the Omdurman Resistance Commitees posted on their Facebook page showed protesters on the streets of Khartoum and police firing tear gas.

Resistance committees are revolutionary bodies in neighbourhoods and regions who coordinate revolutionary action, monitoring the situation on the ground through contact with the Central Doctors Commitee and activists outside the country.

Thousands took the streets in the capital on Sunday shortly before it was announced that Sudan's deposed prime minister signed a deal with the military that will see him reinstated, almost a month after a military coup put him under house arrest.

They protested before the signing ceremony, to denounce the coup and demand the immediate transfer of power to civilians.

Protesters waved the Sudanese flag and chanted "People want to down Burhan" and "there is no militia that rules a state."

According to the deal, the military will also release government officials and politicians arrested since the October 25 coup.

The country's top general, Abdel Fattah Burhan, said in televised statements that Abdalla Hamdok will lead an independent technocratic Cabinet until elections can be held.

It remains unclear how much power the government would hold. It would still remain under military oversight.

It also remains unclear whether all political parties and pro-democracy groups have signed off on the agreement.

Sudanese have been taking to the streets in masses since the military takeover, which upended the country's fragile transition to democracy.

The agreement comes just days after doctors said at least 15 people were killed by live fire during anti-coup demonstrations.

Hamdok has been held under house arrest by military leaders for weeks.

The deal also stipulates that an investigation shall be conducted to identify those responsible for the killing and injuring of civilians and troops that marred protests following the coup.