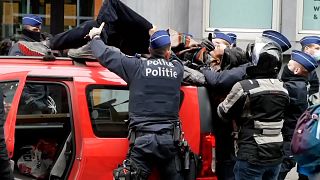 From Paris to Sydney, Nairobi to Seoul, dozens of events are planned worldwide to demand immediate action for communities already affected by climate change, particularly in the poorer countries in the South.

In Glasgow, organisers and police said they expected up to 50,000 people to parade through the streets of the Scottish city near the COP26 summit venue, which is under tight security.

Delegates from nearly 200 countries are in Glasgow to hammer out how to meet the Paris Agreement goals of limiting temperature rises to between 1.5 and 2 degrees Celsius.

At the halfway stage of the COP26 negotiations, some countries have signed up to pledges to reduce their greenhouse gas emissions, with separate deals on phasing out coal, ending foreign fossil fuel funding and slashing methane.

The promises followed a major assessment that showed global CO2 emissions were set to rebound in 2021 to pre-pandemic levels.

COP26 negotiations will continue on Saturday before pausing on Sunday ahead of what is shaping up to be a frantic week of shuttle diplomacy, as ministers arrive to push through hard-fought compromises.

Countries still need to flesh out how pledges made in the Paris deal work in practice, including rules governing carbon markets, common reporting timeframes and transparency.

Countries came into COP26 with national climate plans that, when brought together, put Earth on course to warm 2.7C this century, according to the UN.

With just 1.1C of warming so far, communities across the world are already facing ever more intense fire and drought, displacement and economic ruin wrought by global heating.