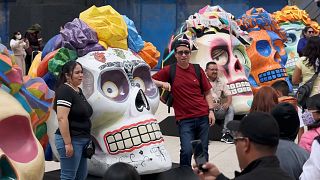 Preparations for the Day of the Dead parade are underway in Mexico City, after it was cancelled last year due to the COVID-19 pandemic.

It's the 4th edition of the event inspired by the 2015 James Bond movie Spectre.

The city authorities are promoting the parade with street decorations while artisans work on the giant floats, costumes and the traditional skulls.

After being suspended in 2020 because of the coronavirus pandemic, the parade was resumed this year at very short notice, just a couple of months ago, which has meant that the 27 artisans who work on The Volador have worked long days to complete the eight floats that will participate along with hundreds of people characterized.

One week before the event, 90 per cent of the floats are finished.

The James Bond movie "Spectre" showed a fictional parade as part of Mexican Day of the Dead traditional celebrations.

Although it had never been actually done, the film's proposal was so successful that ended up turning the parade into a reality.

In 2019, attendance along its route on Paseo de la Reforma Avenue was close to 3 million people, with a hotel occupancy rate of 90 per cent. It also coincided with the Formula One race at the Mexico City circuit.

This year, they will take place a week apart and it's expected that at least 2 million people between locals and tourists will come to see the parade.

The event will kick off on Halloween - October 31st.