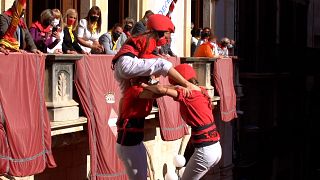 The Plaza de Valls in Barcelona hosted the first 'colles castelleres' - or human towers - since the beginning of the pandemic on Sunday.

The spectacle is held on the occasion of the Santa Úrsula festival, popularly known as the 'zero kilometer of the world' casteller.

The new virus measures now allow the opening of all entrances to the square and no limits on numbers, although the 'castellers' must wear a face mask during the performance.

The tradition of building human towers or "castells" dates back to the 18th century and takes place during festivals in Catalonia, where "colles" or teams compete to build the tallest and most complicated towers.

"Castells" have been declared one of the Masterpieces of the Oral and Intangible Heritage of Humanity by UNESCO.