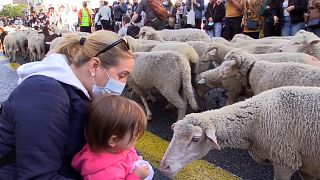 The traditional Spanish Festival of Transhumance returned to the streets of Madrid on Sunday, after being cancelled the year before due to the COVID-19 pandemic.

More than a thousand sheep and goats filled the street, diverting traffic away from the city centre.

The festival, which has taken place since 1994, is a traditional event which sees thousands of sheep "clogging" the main roads of the capital.

The event claims the role of transhumance and extensive livestock farming as a tool for conserving biodiversity and fighting climate change.

Traditional festival dancer, Nati Fernandez said there was "no doubt this is a special year" due to the last one being cancelled.

"We are not as many as usual due to people still being afraid, but every year this is a real party," he added.

The festival is also a protest, which aims to call on authorities to protect Spain's 125,000 kilometres (78,000 miles) of paths used for the seasonal movement of livestock between different grazing grounds around the country.