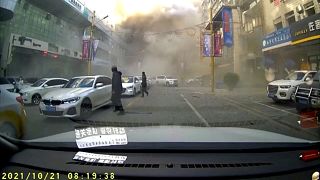 Dramatic dashboard camera footage from a nearby car, released by state media, showed a large cloud of smoke and dust spreading across the street as people ran for cover.

State broadcaster CCTV showed windows ripped out of several buildings on a street covered in dust and debris in Shenyang, capital of north China's Liaoning province.

Rescuers found three dead and more than 30 injured, and the cause of the explosion is under investigation, People's Daily reported.

Gas explosions are common in China because of weak safety standards and enforcement.