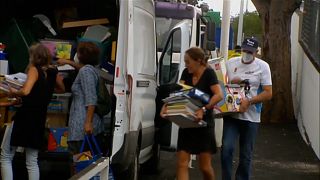 Around 800 residents have been ordered to evacuate their homes as a lava flow on La Palma island advances.

Belongings from schools, business and residencies were being hastily put in the back of vans as people were told that they had just a few hours to leave the La Laguna area of the island.

School books, desks and toys were carried away by local residents.

Others put domestic animals into the back of their vehicles.

Authorities are worried that the lava flow from the Cumbre Vieja volcanic ridge is advancing steadily towards the perimeter of the town.

The volcano has been active for over three weeks with more than 595 hectares covered in lava.