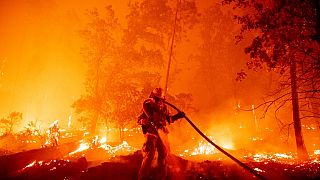 A major Southern California highway remained closed Wednesday and evacuation orders were in place from a growing blaze driven by intense winds that raised the risk of wildfires in much of the state.

A major Southern California highway remained closed Wednesday and evacuation orders were in place from a growing blaze driven by intense winds that raised the risk of wildfires in much of the state.

The fire erupted Monday on a ridge and swept toward the ocean, forcing the closure of U.S. 101, the only major highway on that section of the coast.

Evacuation orders and warnings were in place for ranches and several rural communities of the lightly populated region.

While the area was lightly populated, the blaze threatened more than 100 homes, ranches and other buildings, fire officials said.

The fire was burning a few miles from near Rancho del Cielo, which was once owned by Ronald and Nancy Reagan and was known as the Western White House during his presidency.

The Santa Barbara County Board of Supervisors on Tuesday declared a local emergency and asked Gov. Gavin Newsom to declare a state of emergency that would free up state resources for firefighters and evacuees.

In Northern California, fire crews increased containment of a blaze that destroyed 25 mobile homes, 16 RVs and a park building at the Rancho Marina RV Park in Sacramento County.

No injuries were reported, and the cause remained under investigation.

Aerial video of the scene, recorded from a drone, shows numerous foundations where mobile homes stood just a few days ago.

The fierce windy weather that powered the Brannan Fire on Monday was expected to subside in northern and central California. But red flag warnings for extreme fire danger will return Thursday.