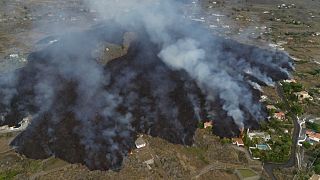 Drone video from La Palma reveals what Spanish media are referring to as the “miracle house” which is still standing after being spared from the devastating lava flow from the Canary Islands volcanic eruption.

The house belongs to an elderly couple from Denmark who have not visited the island since the start of the pandemic, according to Spanish media reports.

Alfonso Escalero, the CEO of iLoveTheWorld, who captured these drone images on the second day of the eruption, said it was a “symbol of hope.”

Meanwhile, the advance of lava has accelerated toward the sea, where its arrival was expected to release clouds of toxic gases, Spanish officials said on Sunday, September 26.

According to volcanologists, the Cumbre Vieja volcano continued to spew ash and jets of lava which at points reached some 500 metres into the sky.