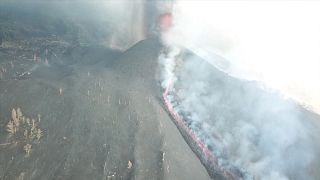 The Cumbre Vieja volcano on the Canary Island of La Palma continued to spew fountains of lava on Saturday, September 25, as the devastating eruption entered its seventh day.

The intensity of the volcanic eruptions has increased in recent days, prompting the evacuation of three additional villages on the island.

Lava flows from the volcano have spread across over 180 hectares of land, destroying at least 400 homes and forcing the evacuation of some 6,000 people.

According to the Canary Island Volcanology Institute, the volcano has been emitting up to 10,500 tons of sulfur dioxide a day.

Flights to and from the Spanish island of La Palma were canceled Saturday because of an ash cloud spewing out of the volcano.

La Palma Airport operator Aena said on Twitter that plane traffic was suspended “due to the accumulation of ash" in the air.

The company said other airports in the Canary Islands were still operational.