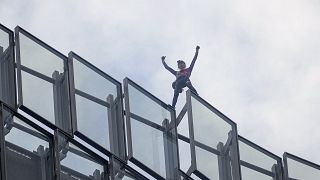 Robert climbed the 160 meters and 38 floors high Alto Tower in the Defense area, saying the stunt was an early demonstration against the COP26 climate conference.

The United Nations Climate Change Conference, or COP26, will take place in Glasgow in November, but Robert is not allowed to climb buildings in Britain due to two injunctions for past stunts.

The 2015 United Nations Climate Change Conference took place in the French capital and led to a series of international commitments on climate known as the Paris Agreement.

But Robert felt "not much has been done" since then.

"It's true that there was the COVID in the meantime but we still have the impression that climate change is not taken seriously," he said.