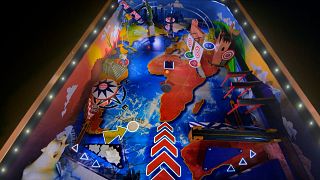 Latvian freerunner and Red Bull Art of Motion champion, Pasha Petkuns, as he takes on a life-size pinball machine.

This huge-scale and truly unique freerunning feat involved the creation of a wall which was 16 meters-high, with a 23 metre-high length (hypotenuse), tilted at an angle of 45 degrees to create near-impossible angles, jumps and catches for the world-renowned freerunner.

The angle of the wall is based on a bridge in Pasha’s homeland, Latvia, where he honed his craft as one of the greatest freerunners in history. After moving to USA working as a Hollywood stunt double and taking a road trip through North America, Petkuns discovered the nostalgic wonders of pinball machines and combined these two inspirations into a dream challenge of becoming a human pinball.

Following a 7-week set build, Human Pinball was filmed in London in May 2021, in a gruelling 3-week shoot where Pasha’s physical capabilities were tested to the limit on the daunting wall.

The result is a showcase of Pasha’s unique athletic and stylistic abilities, playing into themes of his childhood where he first developed his passion, and setting new benchmarks which set him out as one of the greatest freerunners of all time.

The sport of freerunning itself is gaining traction across the globe, with the UK being the first country to recognise it as an official sport back in 2017 . Following the resounding success of what many would consider more ‘niche’ sports making it onto the Olympic roster in Tokyo, there has been growing clamour for freerunning to be considered for future Games.