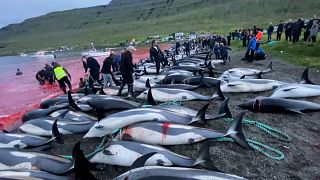 The slaughter of 1,428 white-sided dolphins that is part of a four-century-old traditional drive of sea mammals into shallow water where they are killed for their meat and blubber, has reignited a debate on the small Faroe Islands.

The hunt in the North Atlantic islands is not commercial and is authorized, but environmental activists say it is cruel.

Some people in the Faroes who defend the practice worry that this hunt will draw unwanted attention because it was far larger than previous ones and seemingly took place without the usual organisation.

Islanders usually kill up to 1,000 sea mammals annually, according to data kept by the Faroe Islands.

Each year, islanders drive herds of the mammals - chiefly pilot whales - into shallow waters, where they are stabbed to death.

A blow-hole hook - said to be harmless - is used to secure beached whales, and the spine and main artery leading to the brain are severed with knives.

The drives are regulated by legislation, and the meat and blubber are shared on a community basis.