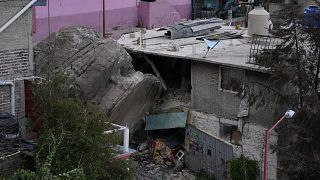 A section of mountain on the outskirts of Mexico City gave way, plunging rocks the size of small homes onto a densely populated neighbourhood, leaving at least one person dead.

Firefighters scaled a three-storey pile of rocks that appeared to be resting on houses in Tlalnepantla, which is part of Mexico state.

The state surrounds the capital on three sides.

As rescuers climbed the immense pile of debris, they occasionally raised their fists in the air, a call for silence to listen for people trapped below.

Rescuers were seen removing a covered body on a stretcher.

The neighbourhood is a heap of jumbled houses on the mountainside, many with corrugated tin roofs.

One massive boulder crashed into a two-storey house of a similar size, knocking out the front wall and spilling its contents into the street.

Mexico state Gov. Alfredo del Mazo said they secured the disaster zone in case of more landslides and to help in the search for casualties.

Del Mazo said authorities believe four homes were destroyed in the landslide, and another 80 were evacuated as a precaution.

The landslide follows days of heavy rain in central Mexico and a 7.0-magnitude earthquake near Acapulco that shook buildings 200 miles (320 kilometers) away in Mexico City.