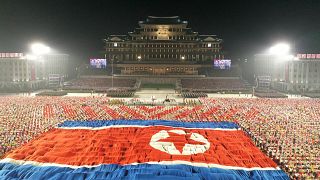 Civil defense forces carrying rifles paraded North Korea's capital overnight in a celebration of the nation's 73rd anniversary that was a marked departure from past militaristic displays.

The parade — overseen by leader Kim Jong Un, wearing a cream suit and visibly slimmer than he was at the start of the year — centered around paramilitary organizations and public security forces protecting Pyongyang instead of the major military units that handle the most important weapons of Kim's nuclear and missile arsenal.

While the North rolled out of its most provocative strategic weapons threatening Asian rivals and the American homeland during parades in January and last October, there was no immediate indication the latest parade showcased ballistic weapons.