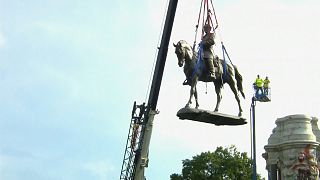 Confederate statue taken down in Virginia

A crowd erupted in cheers and song Wednesday as work crews hoisted an enormous statue of Confederate Gen. Robert E. Lee off the giant pedestal where it has towered over Virginia's capital city for more than a century.

The piece, one of America's largest monuments to the Confederacy, was lifted away just before 9 a.m. as one of the construction workers who helped strap harnesses to Lee and his horse lifted his arms in the air and counted down, "Three, two, one!" to jubilant shouts from a crowd of hundreds.

Black Lives Matter signs were seen in the crowd. Some chanted "Whose streets? Our streets!" and sang, "Hey hey hey, goodbye."

The statue was lowered to the ground where it was expected to be cut into pieces so that it can be brought to a secure location, where it will be stored until its final disposition is determined.

One of America's largest monuments to the Confederacy, was taken down from its prominent perch after years of resistance and a long court battle. Among the crowd watching the removal, there did not appear to be any visible counterprotesters.

Gov. Ralph Northam ordered the statue taken down last summer, citing the pain felt across the country over the death of George Floyd in Minneapolis after a white police officer pressed a knee into his neck. But until a recent court ruling cleared the way, Northam's plans had been tied up in litigation.

The statue, a 21-foot (6-meter) bronze equestrian sculpture that sits atop a pedestal nearly twice that tall, has towered above a prominent residential boulevard named Monument Avenue since 1890 in this former capital of the Confederacy.

Crews began work before 8 a.m. Wednesday. Two public viewing areas were set up, with only limited visibility. A crowd of about 200 people chanted "What do we want? Justice. When do we want it? Now!" as a work crew dwarfed by the size of the statue strapped red and blue harnesses to the Lee figure and his horse. The workers were lifted up to the statue on platforms.