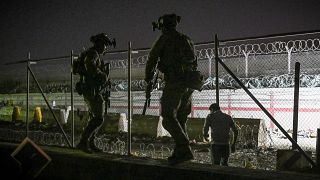 Royal Air Force squadron leader Di Bird said troops hoped to reassure the evacuees they were safe and reduce their stress, including by not wearing intimidating body armour.

"Everything is about making sure we remember that these are our friends, they're people that have worked with us for years and we treat them in that way," Bird told.

Britain's government has said it would welcome 5,000 Afghan refugees this year and resettle 20,000 Afghans in coming years. About 630,000 Afghans have applied for asylum in EU countries in the past 10 years, with the highest numbers in Germany, Hungary, Greece and Sweden, according to the EU statistics agency.