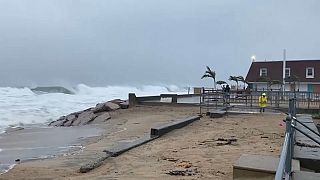 Storm Henri approaches the northeastern shores of the United States

Tropical Storm Henri was on course to make landfall on the US east coast Sunday, with millions in New England and New York's Long Island preparing for flash flooding, violent winds and power outages.

The US National Hurricane Center said in its 7:00 am (1200 GMT) advisory that Henri 50 miles (80 kilometers) southeast of Montauk Point in New York state.

Forecasters downgraded Henri from a hurricane but warned heavy rainfall and the risk of surging seas as the storm churned in the Atlantic, packing maximum sustained winds of 70 miles per hour.

As the surface layer of oceans warms due to climate change, cyclones are becoming more powerful and carry more water, posing an increasing threat to the world's coastal communities, scientists say. Storm surges amplified by rising seas can be especially devastating.

A swath of the northeastern coastline, including New York City, was under alert as the storm approached. If Henri is upgraded again then it would be the first hurricane to hit New England in 30 years.