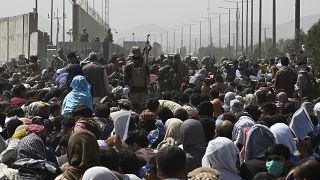 Troops fire in air to control crowds at Kabul airport

Afghan soldiers fired in the air and pushed crowds gathered at the entrance of Kabul airport away as desperate Afghans tried to leave the country in the wake of last week's stunning Taliban takeover.

Videos posted on social media showed Afghan soldiers firing over people's heads as American troops lined up in front of a gate.

Frustration was building at the airport as lines of US troops formed a barrier to crowds wishing to get onto the runway.

On Friday, the United States was struggling to pick up the pace of American and Afghan evacuations at the airport, constrained by obstacles ranging from armed Taliban checkpoints to paperwork problems.

With an August 31 deadline looming, tens of thousands remained to be airlifted from the chaotic country.