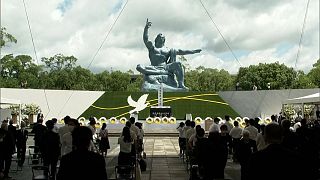 Japanese Prime Minister Yoshihide Suga on Monday called for nations to disarm themselves of nuclear weapons as the country marked the 76th anniversary of the world's second atomic bombing.

At a memorial event in the city of Nagasaki Suga said Japan would keep working with the international community towards the goal of a "world without nuclear weapons".

The August 9, 1945, bombing came three days after the United States dropped its first atomic bomb on Hiroshima, the world's first ever nuclear attack that killed 140,000.

The Treaty on the Prohibition of Nuclear Weapons took effect in January after years of civil effort joined by atomic bombing survivors, or hibakusha.

But while more than 50 countries have ratified it, the treaty notably lacks the U.S. and other nuclear powers as well as Japan.

Many survivors of the bombings have lasting injuries and illnesses resulting from the explosions and radiation exposure and face discrimination in Japanese society.

The government began to provide medical support to certified survivors in 1968 after more than 20 years of effort by them.

As of March, 127,755 survivors, whose average age is now almost 84, are certified as hibakusha and eligible for government medical support, according to the health and welfare ministry.

Monday's ceremony was scaled down significantly because of the pandemic.