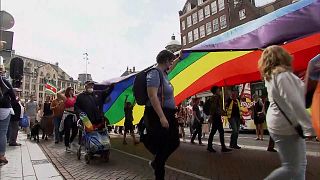 In Amsterdam on Saturday 7 August, thousands of people took part in the Pride Walk, the demonstration for equal rights for the LGBTI community. The protest march is part of the annual Pride Week, which started the previous weekend.

The participants gathered in the Martin Luther King Park. From there they walk via Rijnstraat, Rokin and Dam to Amsterdam Central Station. According to a spokesperson, more than 5,000 people were taking part.

The organization expected that many people would come to the Pride Walk. The demonstration was canceled last year due to COVID-19. This year there were no square and street parties during this 25th edition of Pride Amsterdam. The festive boat parade on the Amsterdam canals, which was actually planned, was also canceled for the second year in a row.

The participants in the Pride Walk want to draw attention to the rights of LGBT people worldwide. On the Rokin they passed 71 flags of countries where homosexuality is still prohibited. The flags are part of the Zero Flags Project and were hoisted last week, provided with a mourning band.

In Argentina and the United States, dozens of people have gathered to show their support for Iranian women.