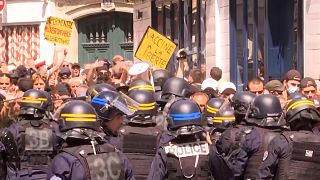 Thousands took the streets of Paris and other cities across France on Saturday to protest against a new bill requiring people to have special virus passes to enter restaurants and other venues, as well as mandating COVID-19 jabs for health workers.

Four separate protests were being held Saturday in Paris, with “liberty” the slogan of the day.

Demonstrators marched through the streets and held signs aloft, some clashing with police, as officers tried to control the protests.

The pass requires vaccinations, a quick negative test or proof of a recent recovery from COVID-19.

Polls show a majority of French support the pass, but some French are adamantly opposed.

Remaining members of France's yellow vest movement, largely from political extremes, were also using the virus bill to try to rekindle its flame.