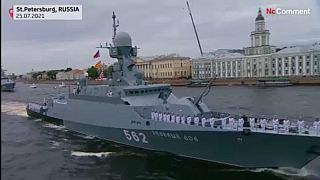 Russia’s Main Naval Parade took place in St Petersburg and Kronshtadt on Navy Day on July 25 (the event is annually celebrated on the last Sunday of July), and was attended by President Vladimir Putin.

This year, the Russian Navy is celebrating its 325h anniversary. The parade featured 54 ships, including the missile cruiser "Marshal Ustinov", the frigate "Admiral Kasatonov", and the strategic missile submarine "Krasnodar". Ships of the Indian, Pakistani, and Iranian navies also took part in the display.

Apart from St Petersburg, naval parades take place at the bases of all the Russian Navy’s fleets and flotillas in Severomorsk, Baltiysk, Sevastopol, Kaspiysk, and Vladivostok and also at Russia’s Tartus naval facility on the Mediterranean coast in Syria.