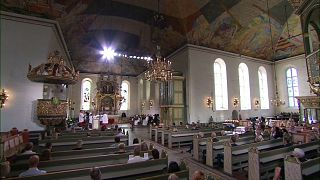 Church bells rang out across Norway on Thursday marking 10 years since the country's worst ever peacetime slaughter.

On July 22, 2011, right wing extremist Anders Breivik set off a bomb in the capital, Oslo, killing eight people, before heading to tiny Utoya island where he stalked and shot dead 69 mostly teen members of the Labour Party's youth wing.

Events have been taking place around the country, including a service in Oslo Cathedral that ended with the first peal of bells, while thousands gathered in the streets outside to mourn the victims.

Speaking in front of 77 roses arranged into the shape of a heart, Jens Stoltenberg, who was the prime minister at the time of the attacks, told cathedral congregation including the elderly King Harald that Breivik "grew up in our streets".