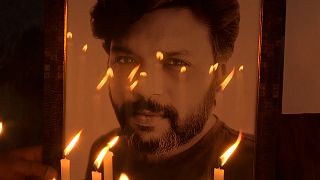 Journalists in India held a candlelight vigil to honour Reuters' photojournalist Danish Siddiqui who was killed on assignment in Afghanistan on Friday.

Danish Siddiqui had been embedded with Afghan special forces for the past few days and was killed as the commando unit battled for control of the Spin Boldak crossing on the border between southern Afghanistan and Pakistan.

Siddiqui was part of a team that won the 2018 Pulitzer Prize for feature photography for their coverage of Rohingya refugees fleeing Myanmar.

More recently, he had captured searing images of India's struggle against COVID-19 and protests against new farming laws.

Saumya Khandelwal, an independent photojournalist who had worked with Siddiqui said she hoped his death will encourage news organizations to take safety of journalists more seriously.