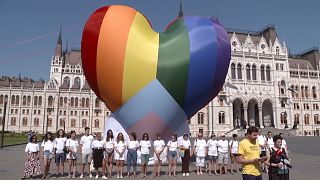 Activists in Hungary erected a large rainbow-colored heart in front of the country's ornate neo-Gothic Parliament building on Thursday, vowing civil disobedience to a recently passed law they say discriminates against and marginalizes LGBT people.

The rainbow colors, now in the form of the 10-meter (30 foot) heart opposite the 117-year-old parliament, have in recent weeks become a symbol of resistance to the policies of Hungary's government under right-wing Prime Minister Viktor Orban.

A law passed in June - which prohibits the display of content depicting homosexuality or gender reassignment to minors - ignited intense opposition in Hungary and became a common cause among many European Union lawmakers for reining in Orban's government.