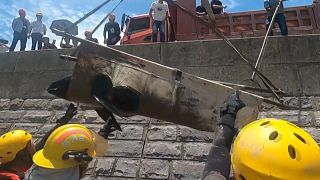 Local police said they received a report at approximately 08:00 Tuesday that whales were discovered on a beach in Linhai City, Zhejiang.

The local public security department and fishery department, as well as locals in the fishing industry, rushed to the site to aid the rescue.

The heat, the weight of the whales, and their location far from the coast complicated rescue efforts.

Rescuers dug holes for the whales and poured water over them. They used wet towels to keep the mammals damp, and erected sheds to protect them from the sun, said Zhu Yupeng from the law enforcement team of the city's marine and fishery bureau.