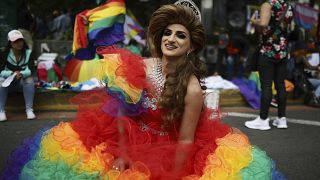 Dancing, singing and cheering, participants in the XXV Gay Pride march walked from the Enrique Olaya Herrera National Park to the Plaza de Bolívar, in the center of the city.

Many of those who took part stopped to take photos next to a staircase painted in the rainbow flag in recognition of Pride.