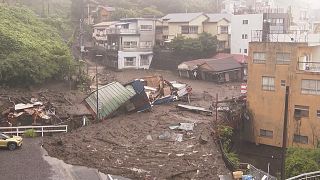 Search continues for some 20 people missing after landslides in Japan

Officials in Shizuoka Prefecture say they're still trying to confirm the safety of about 20 people after mudslides swept away homes in a coastal city.

The disaster, which struck at Atami City, occurred as torrential rain lashed areas along the Pacific coast of Japan on Saturday.

Fire department officials say a resident living near the Izusan area informed them that landslides had struck at around 10:30 am Japan time. They say several houses were destroyed.

Police, firefighters, and Self-Defense Force personnel are searching for people who are still unaccounted for.