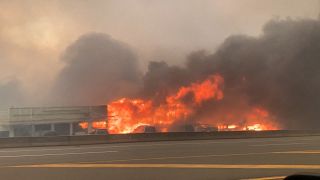 Residents of Lytton in British Columbia evacuated the small mountain town on Wednesday, June 30, as a fast-moving wildfire engulfed the area amid an unprecedented heatwave that saw record-breaking temperatures.

Over the past few days, Lytton repeatedly broke the record for the hottest temperature ever recorded in Canada, reaching a scorching 49.6 C on Tuesday.

On Wednesday night, a raging wildfire began spreading near the town and residents were forced to flee after the town’s mayor issued a mandatory evacuation order for the small community.

The local indigenous NGO of 2 Rivers Remix Society has set up a fundraiser to help the affected community.

According to news reports, hot, dry and winds of up to 71 kilometres an hour were fanning the flames that engulfed Lytton.

According to Canadian officials, over the past five days and during the country’s unprecedented heatwave, some 486 fatalities have been recorded, which marks a 195 per cent increase compared to previous years.