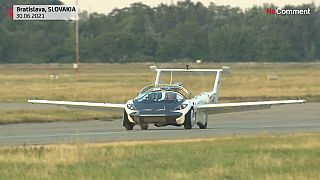 Slovak inventor, designer and pilot Štefan Klein has unveiled a flying sports car at a demonstration on Monday.

The flying car chnaged into an airplane in less than three minutes and landed at Bratislava Airport after completing a successful flight from Nitra to the capital.

So far, this is the longest flight with this prototype of a flying car. It flew distance between Bratislava and Nitra (about 75 kilometers) 25 minutes at a speed of 170 kilometers per hour. Flying car consumption is 8-10 liters per 100 kilometers.

The project of a flying car has cost about 1 and a half million euros. The constructor is working on another prototype, which should be even more powerful. It should be able to fly the same distance as today's flight with almost twice the speed in half the time. They want to introduce it in a year.