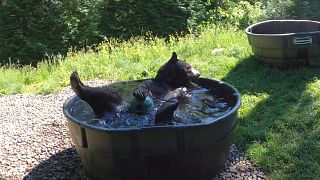 Black bear Takoda enjoyed a refreshing pool dip at Oregon Zoo while playing with a ball. The zoo resident splashed around the wading pools, enjoying a warm summer’s day in Portland.

“Takoda’s having a ball,” the zoo said, with a video released on June 16. Takoda, whose name means “friend to all” in Sioux, arrived at the Oregon Zoo in November 2010.

He had been orphaned as a cub in Montana, where he was found hungry and dehydrated, weighing less than 3 pounds, Oregon Zoo said. Rescued by wildlife officials, the young cub was nursed back to health but could not be released back to the wild, so a new home was found for him at the zoo’s Black Bear Ridge.