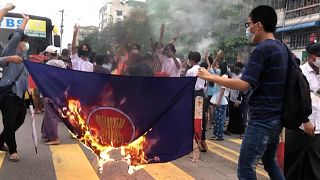 A flag representing the Association of Southeast Asian Nations (ASEAN) is also burned.

ASEAN has led diplomatic efforts to resolve the crisis in Myanmar, but the regional bloc is not known for its diplomatic clout, and observers have questioned how effective it can influence events in the country.

Meanwhile, the trial of ousted leader Aung San Suu Kyi will hear its first testimony in a junta court Monday, more than four months after February's military coup. The junta has brought a variety of charges against the Nobel laureate, from illegally accepting 11 kilograms of gold to breaking a colonial-era secrecy law.