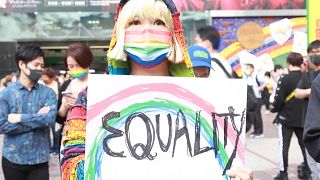 Rights activists have accused ruling lawmakers in Japan of violating the Olympic spirit with homophobic remarks that included saying same-sex relationships "resist the preservation of the species".

The comments, made during discussions on a new anti-discrimination bill, have sparked a backlash as Japan prepares to host the virus-postponed Games in two months' time.

Broadcaster TBS and other Japanese media also quoted an unnamed lawmaker as saying that LGBTQ sexualities "can't be accepted in a moral way".

The Olympic charter states that "every individual must have the possibility of practising sport, without discrimination of any kind".

Tokyo 2020 organising committee chief Seiko Hashimoto -- appointed in February after her predecessor was forced to resign over sexist comments -- has pushed for greater gender equality at the Games.