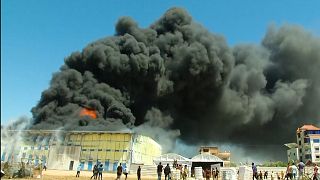 Palestinian firefighters on Tuesday battled a massive blaze at a paint factory in southern Gaza's town of Rafah.

A thick column of black smoke and flames were seen coming out of the facility.

Locals rushed to remove paint buckets near the blaze.

The blaze was believed by locals to have been caused by an Israeli airstrike.