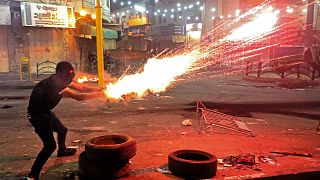 Palestinians clash with Israeli security forces in the city centre of the West Bank town of Hebron.

The most intense hostilities in seven years between Israel and Gaza's armed groups were triggered by weekend unrest at Jerusalem's Al-Aqsa mosque compound, which is sacred to both Muslims and Jews.

Palestinian protesters set barricades on fire and Israeli forces fire tear gas during clashes in the Palestinian neighbourhood of Shuafat, next to the Israeli settlement of Ramat Shlomo, in east Jerusalem.