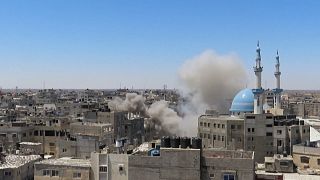 Palestinian firefighters battle a blaze following an Israeli strike on the town of Rafah in the Gaza Strip.

Israel pounded the Gaza Strip overnight killing 10 members of an extended family while rockets smashed into Israel Saturday, amid violence in the West Bank and as a US envoy arrived for talks.